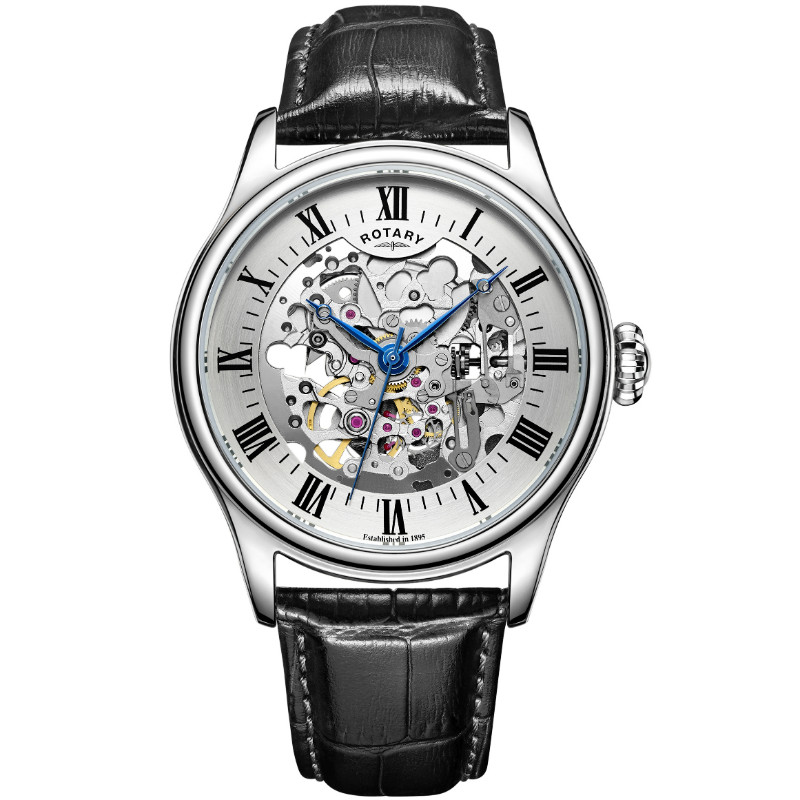 A mechanical movement is a movement powered by a main spring, a flat coiled spring that provides power to the watch, and requires winding every day or few days depending on the spring and power reserve.

How Does it Work?
The wound mainspring uncoils and powers an escapement, also known as a balance wheel. This oscillates a number of times a second, most modern watches have 4 or more oscillations or beats-per-second, and this advances the gear train to move the second, minute and hour hands. As the oscillation is a purely mechanical part, and can be minutely affected by gravity, this means accuracy can vary by up to 30 seconds a day, but most high quality mechanical movements are accurate to within 15 seconds a day. 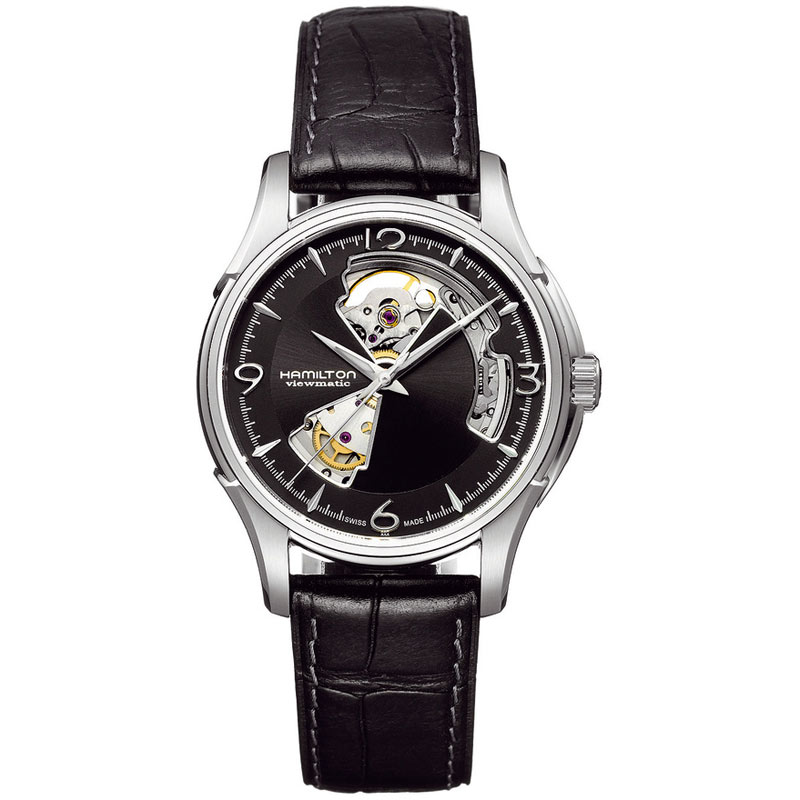 The modern rotor winding system was made famous in watches by Rolex, with the introduction of the Oyster Perpetual in 1920. This was hailed as a major success as it largely removes the need for winding.

How Does it Work?
The mainspring unwinds and drives the escapement controlling the movement. The watch can be started by either shaking the watch to spin the rotor and wind the mainspring, or on some models there is the option to manually wind the movement. As the amount of power stored in the watch is governed by the amount of movement of the wearer, some people may need to manually boost the charge in their watch by winding it to ensure it does not stop. 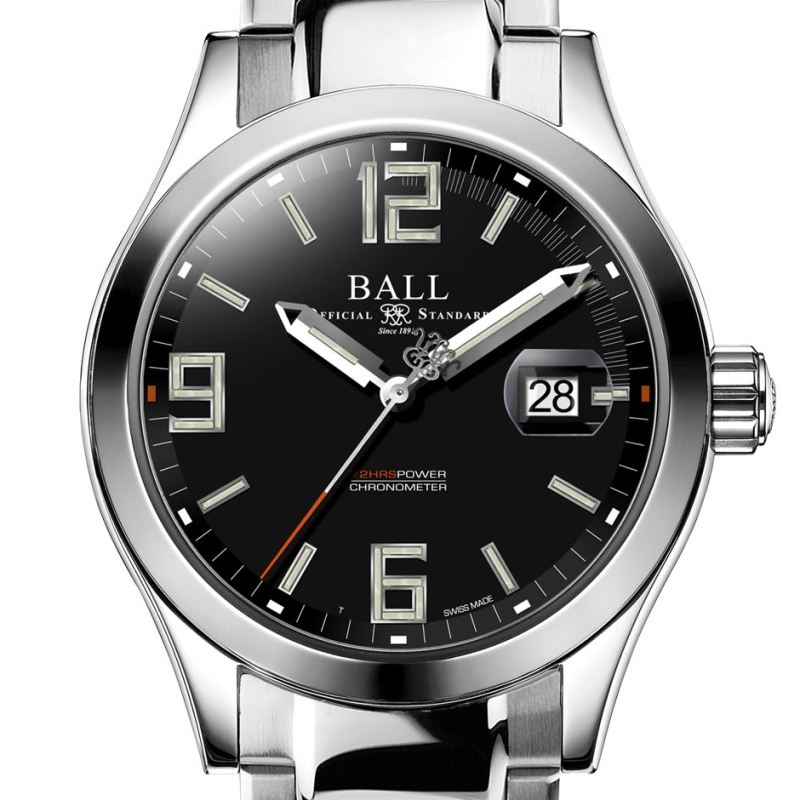 These are finely regulated and monitored automatic movements, independently tested and certified in Switzerland by COSC, to state that the mechanical movement is accurate to within 4-6 seconds a day. Chronometer watches are supplied with the certification with their paperwork to verify this after rigorous testing over a significant period of time. 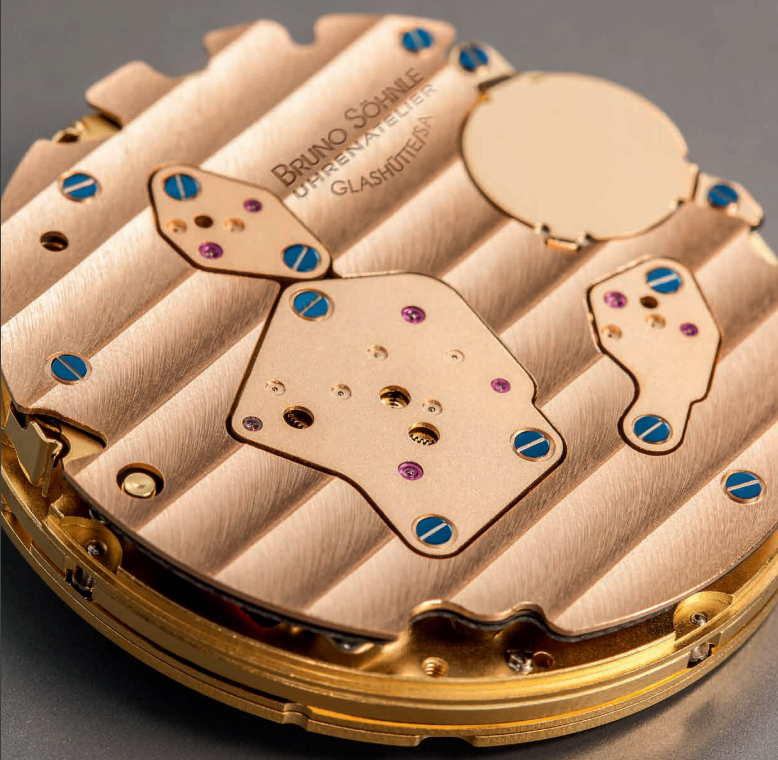 Quartz watches first appeared in the late 1960's, and quickly gained consumer appeal for their accuracy. In modern times, quartz watches make up a large percentage of the fashion watch market given their low maintenance demands. A normal quartz watch exhibits accuracy of around half a second a day gain or loss, in sharp contrast to around 15 seconds on some mechanical movements.

How Does it Work?
A tiny piece of Quartz, specially shaped, has an electric current passed through it from the battery, which causes it to vibrate at 32,768 cycles per second (32,768Hz), exhibiting the “piezoelectric effect”, and generates voltage that is sent back back to the movement in pulses.
The pulses are regulated by a device on the movement called a trimmer.
The signal and pulses are counted by a matter of dividing by 2 (32768 = 2^14), to count the passing of a second.
On every one second impulse from the movement, this transmits to a stepper motor, which advances the chain of gears to drive the hands. 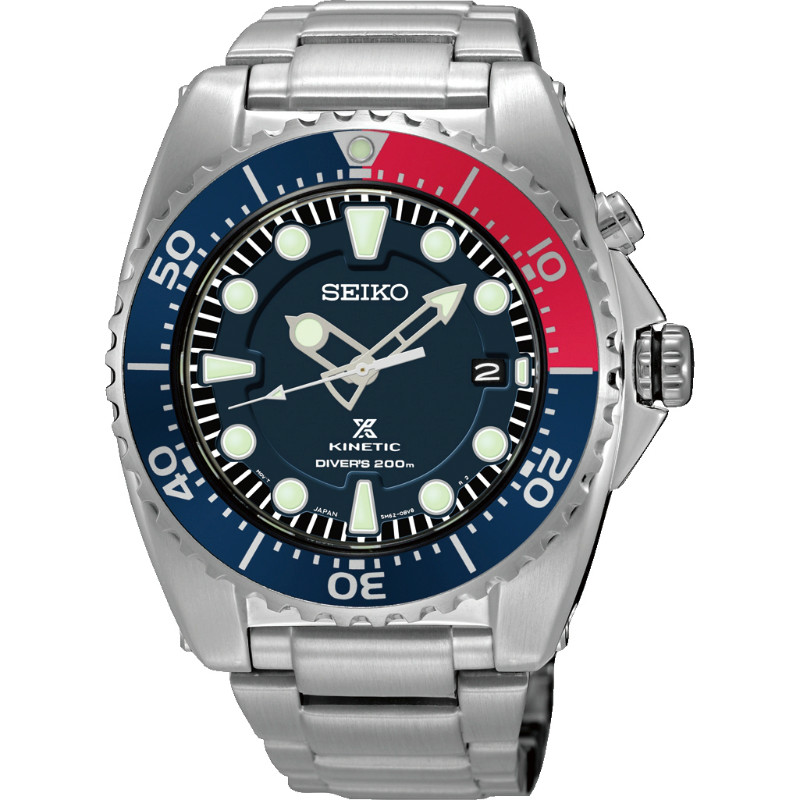 How Does it Work?
This is achieved using a rotor, similar to an automatic watch, but this generates a small current that is used to recharge the power store in the watch. This means, if worn regularly, the watch will never require a battery change, and will be nearly maintenance free throughout the watches' lifespan. 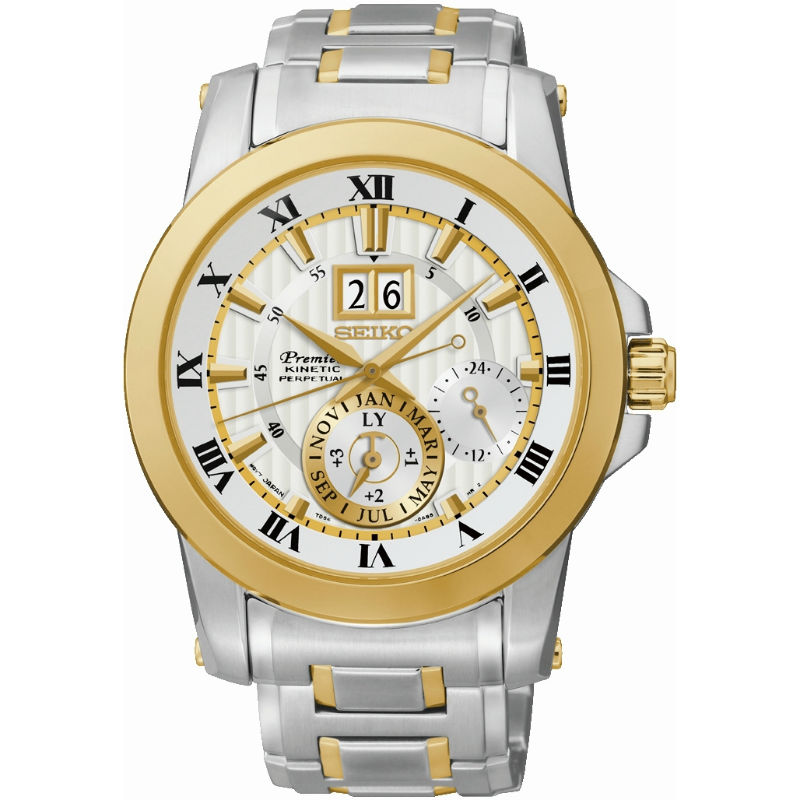 This is an evolution of the Seiko Kinetic movement, that puts the watch into a “low energy mode” when it detects that it is not being recharged, and not being worn. This helps extend the battery life of the watch, and the hands spring back to life when it detects it is moved and the rotor spins.

How Does it Work?
This is largely similar to the Seiko Kinetic movement, the movement of the wearer spins a rotor that recharges a cell that powers the watch. The main difference is that after a period of the watch not being moved, it will deactivate the motors controlling the hands, but maintain the timekeeping. After a period of hibernation, when shaken or worn, and the rotor transmits a charge to the movement, the hands spin round to show the correct time and date. 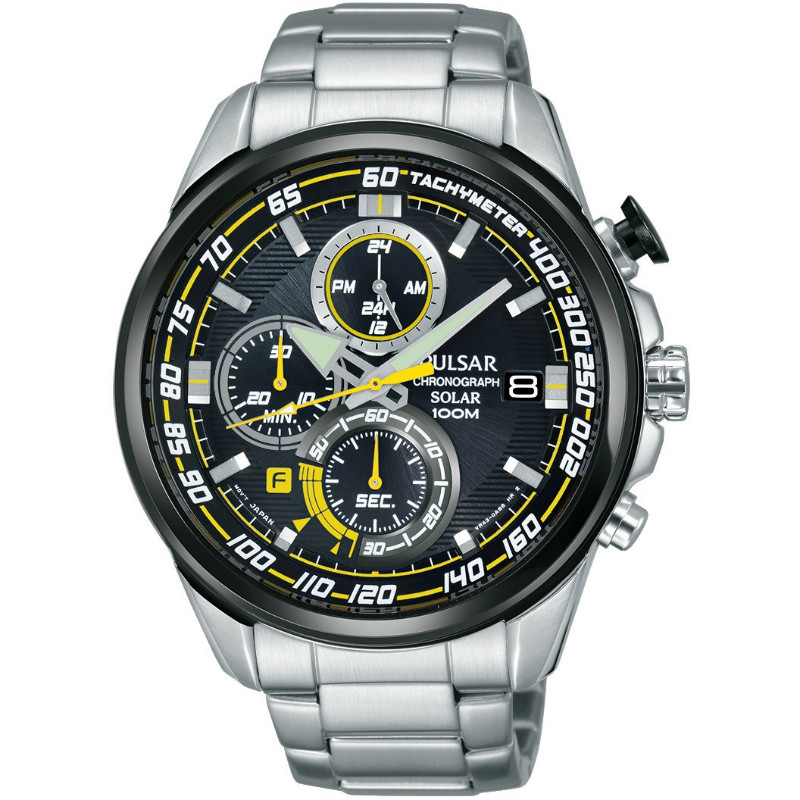 A number of brands have included Solar panels to recharge the batteries in their watches, as it helps reduce the environmental impact of battery disposal.

How Does it Work?
A solar panel under the dial collects solar energy, and converts this to an electrical charge, used to recharge a battery running a quartz movement. 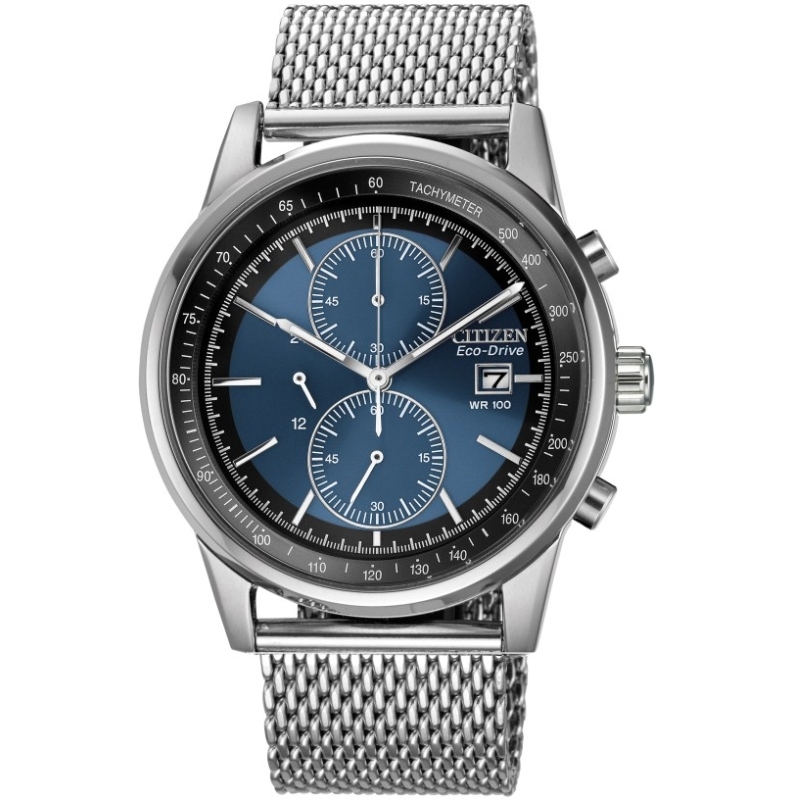 One of the most innovative movements, Citizen designed Eco-Drive, a watch entirely powered by any available light, meaning it never needs a battery replacement. As this technology has improved, they have been able to add more functionality into the watches, including radio controlled and satellite time signal technology, power saving modes, low energy warning, and more.

Since the earliest introduction of this technology, Citizen has worked to make the dial quality better with every new model, and make the cells less visible, a breakthrough especially on ladies' watches.

How Does it Work?
Natural and artificial light shines through a translucent dial, onto a specially designed solar cell underneath, which converts this light into energy. This energy turn powers the watch with normal quartz accuracy, as well as constantly charging a lithium-ion battery for times when the watch does not receive enough light. This gives some models up to 6 months power reserve to continue perfect time keeping even in complete darkness. 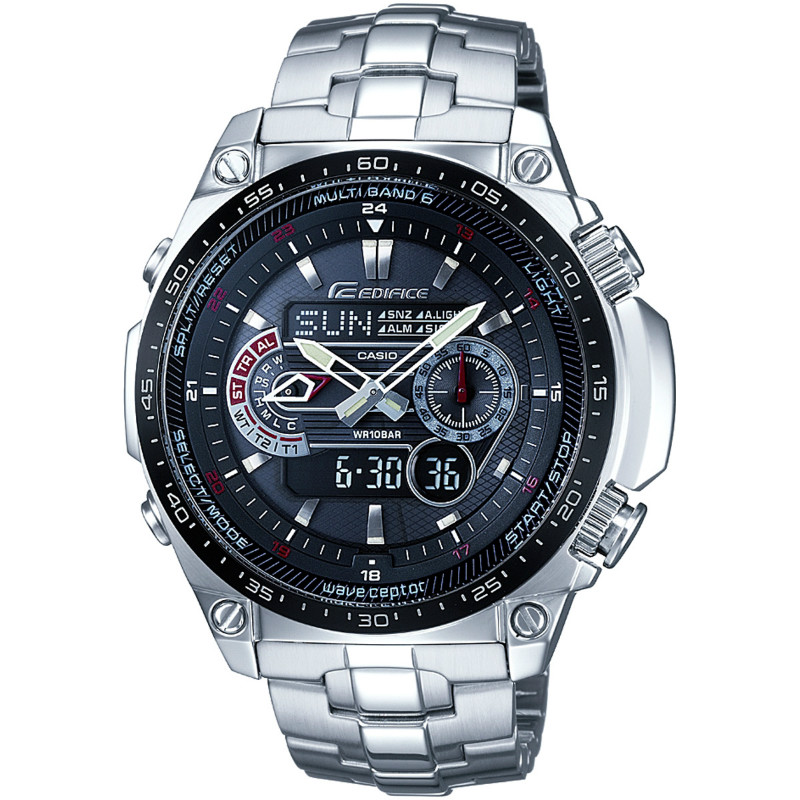 Casio's patented Tough Solar movement allows the user to maintain the position of the hands during moments of extreme shock or forces applied to the watch, without affecting the timekeeping.

How Does it Work?
The movement has a quartz movement as its base, with a rechargeable cell that is charged by the solar cells on the dial. Quite often with models in this range, the watch is also radio-controlled, allowing radio signals from 6 transmitters throughout the Northern Hemisphere to update the time and date, giving unbeatable accuracy. The Tough aspect is in the form of a marker on the hands inside the movement that allows the hand position to be recalibrated if it is misaligned from a large force or shock, such as G-forces in a plane. The timekeeping is unaffected by the hand positions, and therefore remains constant, while the hands can be reset and will display the right time.